1.4.3 (iOS)
1.3.6 (Android)
CookieWars was a game from the Cookie Run franchise by Devsisters. Although retaining almost the same characters as other other games in the franchise, CookieWars was a player-vs-player tower defense game and the first non-platform running game in Cookie Run universe.

The closed beta test for Korean players was available in April 2018, the soft launch was released on July 26, 2018, in three countries: Canada, Hong Kong, and Thailand.[3] A Global launch of the game was made on August 23rd, 2018, although China and Japan were excluded from release.

Due to its heavily different genre than the main games of the series, CookieWars relied on different mechanics that involved strategy, something that was less present in the other games. Players could either play in a set of stages to complete a story, against another player, or in several mini-games to earn rewards.

CookieWars was initially teased alongside several other games under the Cookie Run IP, and was the first of them to come out, with the CBT of the game being presented in April of 2018. Shortly after, in July, the game was given a soft launch for a testing period, and then properly released the following month.

The game was quite popular for a time and even earned the Google Play Best of 2018 Excellence Award in Korea.[4] However, there was frequent unease in the playerbase over continual nerfs to the ways that premium currencies and higher-rarity units could be obtained, especially as these nerfs were not always noted down by Devsisters or OrumLabs.

After January 17, 2019, the game stopped receiving updates without a statement made as to why, and was held in a limbo state. While still playable, no developments were made towards the game, and events simply repeated endlessly.

OrumLabs was also revealed to have been terminated due to its poor performance, potentially even because of bankruptcy.[5]

On April 15th, 2020, it was announced that CookieWars' service would come to an end[6] on May 15th, 2020, citing an inability to keep the servers going despite the desire to.

The player goes through levels in various worlds. Each world has 10 levels. Each level has 3 star requirements, which once met allow the player to send their Units through the level without actually playing it. There are various Battle Modes present in Story Mode:

Similar to the life system in LINE Cookie Run and Kakao Cookie Run, Hearts are one of the main factors in Cookie Wars. Every time a level was played, the player would lose hearts. The total capped heart amount would increase by level. Once the player loses less than the cap amount, they would slowly get them back over time, however, the hearts can also overflow over the cap amount. Hearts can be obtained in the shop, or by quests, playtime rewards, daily rewards or levels.

Playtime Rewards are gifts granted to the player based on playtime. Playtime rewards refresh alongside Daily Quests

The first teaser of CookieWars (with some removed characters). 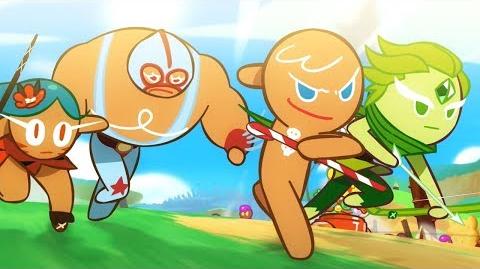 Cookie Wars - The crunchiest battlefield yet!
A promotional short for CookieWars.

Happy Holidays from Cookie Wars!
A promotional video for CookieWars themed around the holidays.