Cookie Trials is a mode introduced into Cookie Run: OvenBreak alongside the release of Cherry Blossom Cookie on March 12, 2018. It is a ranked mode where players run with a specific Cookie and Pet on a unique stage with certain restrictions.

Based on how well a player scores, they will receive rewards in the Trial Goals. Trial Goals range from Bronze to Diamond in Normal Mode, and reaching Diamond rank means the Normal Mode Trial has been completed. Trial Goals range from Hard Gold to Hard Rainbow in Hard Mode, and reaching Hard Rainbow rank means the Hard Mode Trial has been completed. The points needed to achieve the next rank are shown during gameplay.

All trials released prior to Hydrangea Cookie's Trial also had a total of 25 Bonus Missions per trial. Bonus Missions give an objective other than scoring, including collecting a specific Jelly, destroying obstacles, or entering Bonus Time. The requirement must be met in a single run, and Bonus Missions must be completed in order. Each Bonus Mission gives a reward, most notably, Magic Ingredients for Magic Candy.

If a player does not own the trial's Cookie and Pet, they may play with a level 1 Cookie and Pet and can get rewards from ranks starting from the September 26, 2021 update.

Whenever a Cookie receives a trial, there is a time period of one month where players can participate in the New Cookie Cup. During this period, players can receive additional New Cookie Cup Rewards in the Trial Goals.

At the end of a New Cookie Cup, Players who reached Diamond and Rainbow rank will receive Crystals, Treasure Incantations & Spirit Potions based on how well they scored compared to others.

On August 26, 2021, Hard Mode trials were introduced. Normal Mode trials changed to have less Diamonds given at each rank. The Spirit Potions reward changed to Treasure Incantations.

In Hard Mode, you will be tested to the limit with a more difficult map and very challenging score requirements. Cookies and Pets are not limited by level caps. Invocation Cards are not allowed. Normal Mode is the mode for trials released before August 26, 2021.

Infinite Trials ended on August 26, 2021, being replaced by Hard Mode. Infinite Trials are an event where a trial whose Cookie Cup has ended has its level caps temporarily removed. The Cookie, Pet, and Treasures can be used up to their maximum levels, including enhancements on Treasures. All other limitations still apply. Only players who have reached Diamond rank can participate in the Infinite trial. During the Infinite trial, five difficult trial goals can be reached, higher than Diamond. The event lasts two weeks, and, like standard Cookie Cups, rewards are given at the end based on worldwide ranking.

A random incomplete trial whose New Cookie Cup has ended is featured as "My Trial". This is different for different players, hence the name. Reaching Diamond Rank in My Trial will give either a Supreme Cookie Chest, Supreme Pet Egg, or 1000 Crystals, as well as the normal rewards. Once My Trial is completed, or if it is not completed after two weeks, a different trial will be chosen to be the new My Trial. If all old trials have been completed, no My Trial is available.

Starting on March 26, 2020, rewards can be earned based on the number of Trials where Diamond rank has been achieved. No extra rewards are currently gained from completing more than 60 Trials, but more rewards are planned to be added in future updates. 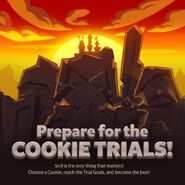