The company was initially founded as a start-up named Extra Standard (Korean: 익스트라스탠다드) in 30 May 2007, by Sejoong Kim and Ji-Hoon Lee. They changed the name to Moblier Corp. (Korean: 모블리에) in 2009[3].

By 2009, the start-up has renamed again into Devsisters, although the new name was legally accepted later on March 2010[3]. and has shifted their focus on iPod Touch and iPhone gaming and application market, saying that "Apple was one of the forerunners to lead a paradigm shift in distribution with its open market platform"[5]. By this shift, they started to launch several iPhone-based apps and games, including "OvenBreak" (the predecessor of Cookie Run) in 3 July 2009[6]. OvenBreak garnered 20 million downloads by the end of 2009, at such point OvenBreak quickly became the top game of iOS in 20 different countries[7]. The success of OvenBreak then followed with releasing OvenBreak Infinity (2009) and OvenBreak 2 (2012-2013).

After the hit success of Ovenbreak, Devsisters decided to modify Ovenbreak to fit the Korean market. They were applying the affiliation with KakaoTalk platform for 6 months before releasing Cookie Run in 2 April 2013[4], a move that heavily boosted the game popularity because KakaoTalk has been downloaded on 95% of smartphones in Korea[7]. By the end of 2013, Cookie Run grosses KRW 62 billion alone, making Cookie Run the most downloaded app of 2013 in South Korea, and statistically being downloaded by the half of the country's population.

The hit popularity of Cookie Run resulted Devsisters expanding the game into international releases, by launching the English version of LINE Cookie Run in January 2014. The LINE version has garnered 10 million downloads in just 30 days after its release, quickly claiming the top game in 10 different Asian countries[8]. By July 2015, Line Cookie Run have been downloaded for 50 million times.

The huge success of Cookie Run have brought the company moved from start-ups into a five-storey building with 98 employees (as of 2015), including three chefs and a Korean physician in the Seoul's Gangnam business district[11]. The success have further brought Devsisters into the Korean Securities Exchange, with its IPO in October 2014. Later in 2015, Devsisters has expanded their business outside of gaming industry, by creating two investment companies, "Devsisters Ventures Ltd." (established 11 May 2015) and "Devsisters No.1 Investment" (established 21 December 2015).[3]

Devsisters mainly produces mobile apps and games that can be played in iOS and Android devices.

Devsisters is publicly traded in the Korean Securities Exchange (KOSDAQ) under the stock symbol KOSDAQ:194480. The Initial Public Offering was issued on 6 October 2014[28]. However, less than two months after its IPO, stocks has been down by 30%, in which Wall Street Journal says "...reflecting investor skepticism that the company can replicate the initial success of Cookie Run". Kim Jong-heun, the CEO, have replied that the downfall is coming from "selling by institutional investors, not company insiders," and further saying he is "well aware of the challenge of following up one smash success with another — just ask the developers of Farmville, Angry Birds and Candy Crush Saga."[11]

Since the inception of Cookie Run, Devsisters have enjoyed a huge amount of profit and popularity that boosted their growth. Devsisters grosses their highest profit in 2013, the same year of Kakao Cookie Run's releases, earning KRW 62 billion. However, since there are no game or app released after Cookie Run, Devsisters' income starts to declining to KRW 31 billion (2014) and for the first time recording net losses of KRW 968 million in 2015. Revenues from gaming purchases has significantly declined. For instance, net sales by Devsisters has sharply declined by more than 70%, from KRW 69 billion (2014) to KRW 19 billion (2015)[29]. For this reason, Devsisters decided to postpone the release of "Cookie Run 2", despite their urgency to stop poor financial performances[30].

The third subsidiary, "Devsisters Japan," was established on 31 October 2017, and it is the first overseas subsidiary established by Devsisters. Devsisters plans to utilize the subsidiary to optimize game service to the needs of local customers and conduct Japan-exclusive services for jobs such as game operation, marketing, and customer support.[31] 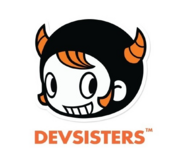