Easter Eggs are tidbits of code, hints, and secrets hidden throughout the game that are not revealed to players, but instead left there sometimes unintentionally or not by programmers to find. Some easter eggs may reveal a spoiler for future updates, but can also specifically made for visual entertainment purposes.

In the Episode Map screen, dragging the screen all the way to the right reveals Apple Cookie, which was then an upcoming cookie. Players may also see her pet, the Green Apple Rabbit, on the final stage of the first episode, Escape from the Oven.

Meanwhile, dragging the screen all the way to the left of the Episode Map instead reveals Soda Cookie making a wave on his surfing board.

Following the popular culture where a bunch of garlic is often used to keep humans away from vampires, combining Vampire Cookie and Rare Garlic would reveal a combination bonus "Oh no! Not garlic!". When played, the combination bonus would make the cookie's base speed increased, but the energy would drain faster. Due to the retirement of all Hidden Combination Bonuses after the Wrath of the Dragon update, this easter egg can no longer be seen.

The most peculiar thing about the license plate is that his license number, AMAZ-INGK-IWIC-OOK2, is not a regular random code. It is actually part of a secret code that grants players 10 Crystals when entered on the coupon code.

Up until this point, the secret code can still be redeemed and reward the players 10 crystals.

This was leaked before the release of Kiwi Biker Cookie when a Thailand YouTuber exposed the existence of a new secret code, leaking the upcoming cookie's release hours later.

Players are able to find an unusual version of Banana Cookie. However, Banana Cookie's treasure was marked as "sample" and was never released at all in any version of Cookie Run. Possibilities are that the cookie was only for sampling/testing or for making fun of those trying to obtain files. Although the first possibility makes more sense, it may be helpful to first check out if artworks or pages are working correctly after implementing a new item in the game's code.

After the official release of Banana Cookie in-game, this Banana Cookie would be non-relevant nowadays, but only a common Easter Egg and/or a missing character in-game.

As mentioned previously, there are "sample" files, and in this case, 4 different types of files (one of the three is only subdivided in 2 variants); 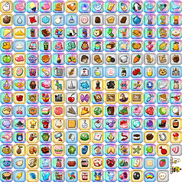 As seen from the third image, on the bottom right, Banana Cookie is accompanied with another "Sample" image, which would most likely be Banana Cookie's Treasure; lately this had been revealed that this is a pet treasure (as henced from the fourth "Sample" image), so this made question if Banana Cookie has a direct treasure instead of an image of themselve. Staying again in the exploration of the game files the "Sample" image of Banana Cookie is labelled as tr_ch17, this would probably explain that they are a somewhat of a scrapped character beyond a normal joke file, although a ch17 sound file doesn't exist. Banana Cookie seems to possess a Pet, as retrieved from this image (Pet on the third line, on Pink Candy's left).

At certain points in the Cookie Run updates, Devsisters has released at least four cookies that fall into the nonbinary (neither male nor female) category. These cookies only use the ambiguous "it/its" pronouns and tend to avoid mentioning their gender in general. This is presumed to be intentional.

So far, the official Cookie Run social media pages intentionally dodge the questions regarding the genders of all four cookies above, although they mentioned that much as diverse as one person can be, Cookies can also be diverse with an example of Cookies with non-gender specific pronouns.

These Cookies were all silently changed to have any form of pronouns removed in Cookie Run: OvenBreak, for unknown reasons, with the exception of Cinnamon Cookie whose pronouns were changed to "he/him".

If exploring the Cookie Run files (if extracted to .zip, .apk and etc.) you would find an unknown class, possibly added by Devsisters with a similar reason to Banana Cookie (joking to those who extracted the file/s, or a scrapped/test idea).

The red treasures (on the left) would be considered for

grade Cookies, while the other ones (on the right) would look like a TBA or SS-class slots, or a scrapped idea.

On November 27, 2015, for iOS devices, a new tower appeared to the right of The City of Wizards. This was to catch a glimpse of the next season as well as the new special episode, Tower of Frozen Waves. After having more than a one month delay from the predicted schedule, this teaser may have hinted players that the new season would come sooner than thought. The easter egg was removed on December 3, 2015.

Tower of Frozen Waves was then officially released on 21 December 2015, with Onion Cookie accompanying its release.

In order to give users a taste of Season 5, Devsisters had planned yet another easter egg for the Android version. On the episode map, players could see what's behind the cloud to reveal the next environment of the upcoming episode. It was viewable, but unplayable. After the major update, players can now play on the new Episode, The City of Wizards.

At the final stage of Escape from the Oven, at the resting phase, players can see Bonus Time letters forming Green Apple Rabbit. It was already present three months before her release in the game, because Kakao Cookie Run had already released Apple Cookie before the New World update. When LINE gets the update, they do not remove everything that has already been implemented in Kakao, including the Green Apple Rabbit as well as Apple Cookie in the Episode map.