Gather ingredients and evolve treasures to make them even more powerful!

Evolve Treasure is a special feature introduced at the start of Season 4 of Cookie Run. With this feature, the player can combine their existing treasures and some ingredients into a treasure with better effects.

There are three types of evolution players can use:

The outcome are as follows:

Crystals guarantee an evolution, but coins do not. Evolving through crystals, their Treasure may have a chance to evolve into a Blessed Treasure, which has enhanced abilities.

Treasures maintain their upgrade level even after evolving. All evolved treasures can be sold for

9,999, regardless of rank and upgrade levels. At some point, it decreases the value from the unevolved treasure.

Evolving treasures will make treasures have a better effect or in some instances, change the treasure effects or add an additional effect. For example, evolving Rare Gunpowder of Pirate's Bomb will change its effect from having a 25% chance of hit obstacles being destroyed or turning into coins into 15% of getting a Gold Coins Boost and 1% Coin Bonus.

However, evolving an S treasure takes a huge sum of coins and has quite a low success rate. If an attempt to evolve a treasure fails, the treasure and the ingredients used will not disappear. Note that there are a few treasures, mostly Cookie's or Pet's treasures and all Power+ Treasures, that have no evolution, such as Tiger Lily Cookie's Jelly Flower Hairpin and Compass Eternally Pointing to Coin Island.

Evolving treasures gives players the chance to obtain a Blessed (or Lucky) Treasure. A Blessed Treasure has enhanced abilities that will greatly aid a player's run throughout the episodes.

Starting with the "Wrath of the Dragon" season, regular Evolved Treasures can be changed into Blessed Evolved Treasure with 100% certainty by trading 1,000 Mystic Gems and 100

Mystic Gems currently can only be obtained by extracting S-Grade Evolved Treasure. The amount Mystic Gem obtained from S-grade treasures will vary, depending on the treasure's level before the extraction and the grade of the original treasure as well as the ingredients needed to evolve the treasure. Currently the highest Mystic Gems you can extract for a non-blessed and blessed S-grade evolved treasure is 88 and 150 Mystic Gems, respectively.

The ranks stated below are the ranks for the normal treasures. Some treasures might evolve into a higher ranked treasure, but the evolution cost remains the same. It follows the upgrade for the regular treasure. When a common evolution is failed, players will only lose the coins, not the treasure nor all ingredients for the attempted evolution. Magic Powder will also be received for failed evolutions, despite a small amount.

There are three visual results when you evolve treasures at the cauldron: one of it failing, one of it succeeding, and the last if it succeeds in blessing the treasure. It only lasts for a couple of seconds, but it is an indicator of the result. 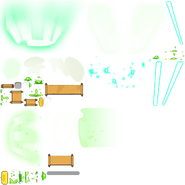