Name in Other Languages

보들보들 유니콘 잠옷 팬케이크맛 쿠키
Fluffy Unicorn Jammies is an Epic Costume for Pancake Cookie. It was released on April 28th, 2020. It is his third Costume, with Baby Elephant PJ and Blue Wedding Hanbok being released prior to it.

It gives a bonus to Pancake Cookie's points earned for Acorn Jellies.

A pair of unicorn pajamas, hand-stitched seam by seam! From the back, anyone wearing this looks like a real unicorn. You'd never have guessed it was actually...Pancake Cookie!? These jammies are so soft and warm, sleep is just a blink away! 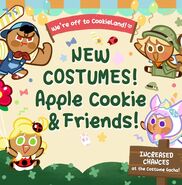 Fluffy Unicorn Jammies featured alongside the other Costumes in its set. Retrieved April 28th, 2020. 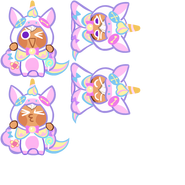 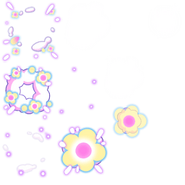