Guild Run is a game mode in Cookie Run: OvenBreak, added on May 30th, 2019. Guild Runs are competitions between four Guilds of similar Ranks, where members of a Guild all run in up to four randomly selected Arenas, and their combined high scores compared to the other Guilds determines the winner. Running in Guild Runs gives a player seasonal Reward of Guild Coins, Coins, and Crystals, and winning Guild Runs awards Guild Coins and causes the Guild to rank up to receive better rewards.

Guilds of at least level 4 can participate in Guild Runs. Guild Runs can only be initiated by the Leader or Officers. If a member tries to start a Guild Run, the Leader and Officers will be notified that a member wants to run. Guild Runs use multiple different Arenas, specific maps with special rules and a limited selection of Cookies, Pets and Treasures, similar to the Champions League. At the beginning of the Guild Run, the Leader or Officer of each guild spins a wheel which randomly selects one Arena. If the wheel isn't spun within 10 minutes, an Arena is chosen randomly without spinning it. After each Guild has selected an Arena, the Guild Run starts. Multiple Guilds may roll the same Arena, causing there to be less than four Arenas in the Run.

Each attempt at an Arena requires a Guild Ticket. Each player starts a Guild Run with 10 Guild Tickets, and can get more by purchase, by watching ads, or by being given a gift from a Guildmate. Five tickets cost

200, and can be bought for personal use or bought for another guildmate. Watching an advertisement gives one ticket, which can be done ten times per Guild Run. Each member of a Guild can send a free gift of one ticket to a maximum of 20 guildmates.

Each Guild Run Season lasts for two months. The current season determines the Season Items in the Guild Shop and the available Arenas, as well as any additional Season Rules and Recipes.

The Guild Kitchen can be used to cook a Guild Meal that provides a buff to all Guild members during a single Guild Run. Ingredients for the Meal can be collected in Exploration Quests, and added to the pot by all members. The Guild Leader and Officers can decide when to cook, and can request a specific Recipe. If a request is made, Guild members who contribute will receive a reward of Guild Coins or Coins. Once the Leader or Officer decides to cook, the ingredients currently in the pot will determine the result. If the ingredients in the pot don't correspond to any recipe, a Mistake will be cooked. Newly cooked meals are added to the Recipe Book, where players can see the effect and ingredients of every meal they've cooked. A meal cannot be replaced during a Guild Run but one can be cooked during the Run if it is started with no meal.

Starting with the Bamboo Forest Season, there are Seasonal Recipes, which are only possible to cook during their season. So far, they have always been strong choices with effects connected to the Season Rule.

The Guild gains or loses Guild Trophies after a Guild Run based on the total stars collected, and these Trophies determine the Guild Rank. After the current Season is over, players who participated in at least three Guild Runs will receive a Season Reward based on their Guild's Rank.

When Guilds of Ruby rank or higher participate in Guild Runs, Arenas count the top scores of more players, so more guildmates must participate. The top twenty scoring Guilds are Rainbow rank, and receive a special cosmetic Guild Lobby design.

Before Guild Run seasons started, Guild Runs had 20 arenas, on a board themed after Dragon's Valley. The Guild Kitchen did not exist, and neither did seasonal Jelly Sets or Season Rules.

The Dragon Awakens update on September 25, 2019 brought the first season. This season was again themed after Dragon's Valley, but had a smaller board with 12 arenas. All seasons since have had 12 arenas, and this season also added Season Rules, Seasonal Jelly Sets, and the Guild Kitchen. The featured Jelly Set was the Adventure Feast Set.

The Frozen Mountains season came with the Jolly Winterland update on November 25th, 2019. This Season was snow and winter themed, with the Winter's Chill Set featured. All recipes besides An Effort was Made and Deluxe Tail Steak were buffed, while those two were nerfed . The Season Rule was Snowflake Jellies fall from the sky! Snowflake Jellies were immune to magnetic effects.

Season 3 began on January 29th, 2020, in the Valorous Champions League update. This update added two new meals, Strawberry Fudge Fern Shortcake and Strawberry Burger, and balanced older meals. The board for this season was a sunny floral garden, and the Spring Picnic Set was available. The Season Rule was Jellies sprout from the ground!

The Pineapple Isle season was added on March 26, 2020 with the Legends of the Dragon Isles update. The board was themed after the islands that are home to Mango Cookie and Ananas Dragon Cookie. The Fruity Fruits Set was featured.

Season 5 started on May 27th, 2020, with a bamboo forest theme to match the Martial Arts Champion update. This Season was the first to have a seasonal recipe, the Extra Special Healthy Stew. The Peace and Prosperity Set was available.

The Sunken City season began on July 27th, 2020 in the Secret of the Lost City update. The board is themed after Lost City of Sugarteara. The seasonal recipe was Bubbly Magical Rainbow Bubble Tea, the Season Rule was Magic Bubbles cover Jellies at certain intervals, which acted like the Bubble Wave Shell. The Adventure Feast Set from Season 1 returned, with newly added Frozen Bear Jelly and Rainbow Bear Jelly skins.

The seventh season, Cheddar Mine, began on September 27th, 2020, named and themed for the Glittering Cheddar Mine update. The board is inside a mine, with a full minecart in the center. The season recipe is Fancy Emergency Rations, and the Season Rule is Cheese Pickaxes excavate Ore Jellies at certain intervals! The Fruity Fruits set from season 4 returned, with newly added skins.

Season 8 began on November 26, 2020, in the Dazzling Year's End Party. The board is snow themed. The season recipe is Cake of Bravery, and the Season Rule is Follow Music Notes for a flashy finale! The season Jelly set is the Happy Holidays 2020. 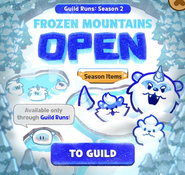