The Lobby or Main Lobby is the main menu of Cookie Run: OvenBreak. The two most important sub-menus, the Play menu and the Cookies menu, are accessed from the Lobby, as well as other important menus like the Gacha, Friends list, and Mailbox. The OvenPass, Royal Club, and new packages are advertised on the Lobby screen. In addition to being the main menu, the Lobby has a secondary purpose of displaying a chosen Cookie, who can give daily gifts to the player and receive daily gifts to raise their Affection. Alternate designs for the Lobby which change the visuals and music can be received from some Events.

A Cookie of the player's choosing is displayed in the center of the Lobby. Once per day, the Cookie will give a gift of some currency to the player, which varies by Cookie. Each Cookie gives Crystals, Rainbow Cubes, Magic Powder, or Coins. If the Cookie has over 600 Affection, they will give more of the currency. A low Affection Cookie will give 50

, which can be increased to 60

A Cookie in the Lobby can be tapped to talk to them, which displays special dialogue and raises their Affection by 2 for the first three taps of the day. The taps can be split among different Cookies. A Magic Ingredient gift can be given to the Cookie once per day, which also increases their Affection. Each Cookie has at least one liked item and one disliked item, which are hinted at with dialogue shown if they have over 400 Affection. A liked item will raise their Affection by 15, while a disliked item will not raise it at all. Items the Cookie is neutral towards will raise their Affection by 5. Some Costumes, primarily Epic and Super Epic ones, change the Cookie's likes and dislikes. Almost every Cookie with Magic Candy like their unique Ingredient as well, and the Royal Golden Dough received from the Royal Club and some E-rank items like the Anniversary Cake are liked by all Cookies. Royal Club members can give three gifts per day, and receive triple affection from talking.

Once a Cookie reaches maximum Affection, they will give the player their unique Basic Jelly skin from the Lobby.

By default, the Lobby background is The Witch's Kitchen. Other designs for the Lobby can be obtained from Events or other means, and once new designs are obtained, the design can be changed from the ... menu where the Lobby Cookie is changed. Lobby designs change the background graphics as well as music. Some Lobby designs have an element that can be tapped for a visual effect, such as lights that can be turned on and off. All differences between Lobby designs are cosmetic. The first new Lobby design, Walnut Cookie's Detective Office, and the ability to change between designs were introduced on September 4th, 2019.

Throne of Perpetual Chaos and Darkness

The current Lobby system of talking to a single Cookie who gives and receives gifts was added in the 2nd Anniversary Grand Cookie Party update on October 24th, 2018. Before this, there were two earlier designs for the Lobby. The Lobby was first added on August 30th, 2017 during the Season 2 update, as this was the first time a game mode besides Trophy Race was playable. The original Lobby allowed displaying more than one Cookie, who used their loading screen graphics, similar to how the Guild Lobby looks. Cookies could be displayed in Costumes, and the same Cookie could be shown in multiple spots. In the Season 3 update, the Lobby was modified to have the Cookies use their running graphics on a new background. Previously, Free Chests could be opened on a four hour timer from the Lobby, which gave a small amount of Common and Rare Cookies or Pets, even less than a Cookie Chest, with a low chance of Epic units. Free Chests were replaced with the daily Currency reward, and chests using the same design are rewarded from GingerBrave's Trial and Hero Cookie's Trial as part of the Tutorial. 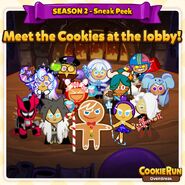 Promotional image for the Lobby shown before its release. 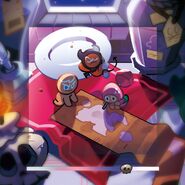