View source
watch 02:17
New Pokemon Games - The Loop
Do you like this video?
Play Sound 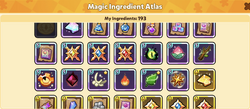 The Guild Shop also sells Magic Ingredients, including S-Rank ones. Fading Embers and Crystalized Essences of Night are always available, and other Ingredients appear randomly. Cookie Trials give Magic Ingredients for the featured Cookie's Magic Candy in both Rank Rewards and Bonus Missions, and the same Ingredients are also given in Events around the time of a Cookie's release.

All Magic Ingredients are used at the Magic Laboratory. In conjunction with one or two other Ingredients and a Coin payment, a variety of items can be crafted. Magic Candies can also be crafted directly from a Cookie's menu page. If unwanted Ingredients are owned, Magic Powder can be extracted from them, but for much less Powder than the cost to buy them.