Of all the Cookie Run users worldwide, how good are you?

The Medal System is a new ranking system implemented on October 23, 2015. It is used to measure how good a player is, depending on the weekly ranking of all players that plays the game, not only on the player's leaderboard. It is most commonly compared with the league (or ladder) system, where one can dethrone the other. As score resets every Sunday, medals were also reset.

This systems ended in June 2016, with the last medals rewarded on the 26th. Players who played the game during June 26, 9pm GMT+9 to 2pm the next day would be rewarded 10

as compensation for no medals. It was soon replaced with the League System.

The ranking are divided into two evaluation. They are:

While the global weekly leaderboard is not shown to the public, this system is able to estimate in what category the players' score lies on compared to the world. Players can also see how close they are to the next rank. Target score to achieve the next rank is usually shown, but it will not be shown from Legend III onwards.

At the end of the week, players will be rewarded with Medal, a new currency which can be used to redeem lots of rewards such as Magic Powder, Ingredients, or even Expand Treasure Cabinet in the Medal Exchange Center. 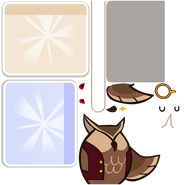