For Quests before the Season 3 update, see Cookie Quests.

Quests are a series of missions available in Cookie Run: OvenBreak, starting from the Season 3 update on April 26th, 2018. Each Quest has a small task, which varies based on the category of the Quest, and completing one gives a reward and typically gives a new, harder Quest. Most Quests will naturally be completed through play, and do not require any special focus.

Each of the three categories of standard Quests has multiple missions available at any one time. Completing one of them gives a reward and a new, similar Quest of higher difficulty. Finishing many Quests in the same category unlocks large rewards, typically Crystals, Supreme or Special Cookie Chests, or Supreme or Special Pet Eggs. Finishing enough Quests can unlock entirely different Quest chains as well. For example, the Cookies & Pets category starts with four Quests: Collect 5 Cookies, Collect 5 Pets, Use Cookie Gacha 5 times, and Use Pet Gacha 5 times. Completing the first of these Quests unlocks a new Quest to Collect 8 Cookies, and completing enough of them will unlock new Quests in the Cookies & Pets category, such as Create Lv.1 Magic Candy for 1 Cookie or Use 10 Spirit Potions.

Quests in the same "chain" must be completed in order, and many Quests do not count if they are completed before being unlocked. Even though collecting more than 200 Trophies are required to reach Dazzling Crystal Pudding Cave, completing the Quest Reach Land 4-1 and unlocking the next Quest to Get 200 Trophies will not count Trophies previously collected. However, Quests involving reaching a certain Land, or obtaining or upgrading a specific amount of Cookies, Pets or Treasures, will be completed if the requirement has ever been met.

I've prepared a little something!

Daily Quests have different mechanics, particularly after being reworked in the Season 4 update on July 29th, 2019. Daily Quests are hosted by Cinnamon Cookie, using his Fortuneteller Apprentice Costume. Each day gives three Daily Quests, presented on cards similar in appearance to the Fortuna Cards seen in The City of Wizards Event. Each card has a mission and a currency or ticket reward.

The rewards can be Coins, Crystals, Magic Powder, Rainbow Cubes, Rescue Tickets, or Breakout Replay Tickets, and are the same for each player. The reward can be increased by watching an advertisement after completing the Quest, and members of the Royal Club get the bonus reward without having to watch the ad. 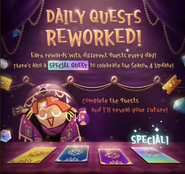 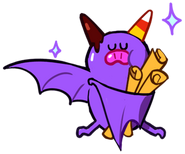 The bat NPC that hosts Quests. 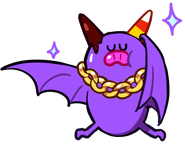 The bat NPC wearing a necklace. 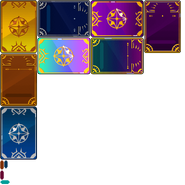 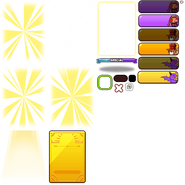 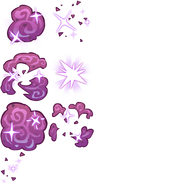