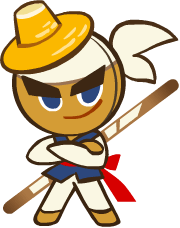 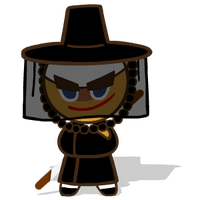 Treasure for Upgrading to Level 8

Catch me if you can!

Instant landing when pressing SLIDE after a 3-10 multi-step jump.

Rebel Cookie was often strategically used as the cookie for relay, just like Pirate Cookie, because at further stages obstacles become harder to avoid and the revived Cloud Alter Ego retains its 120 Energy, helping the player run even farther and get more XP and points.

He can jump up to 10-step jumps, just like Ninja Cookie, and to avoid obstacles, he can teleport back on the floor during a jump when “slide” button is pressed. However, he will still lose Energy if he lands on an obstacle after instantly falling back to the ground.

However, in the final months of LINE Cookie Run, it was realized that a combination of him relaying into Wind Archer Cookie could actually score higher than the previously assumed maximums from Onion Cookie or Macaron Cookie.

An organic cookie made of rice that makes you feel healthy only by looking at it. He mastered sorcery on his own and can do up to 10-level jumps. He is popular among Cookies for stealing the Witch's possessions and sharing it with others.