The Trophy Race is the primary game mode in Cookie Run: OvenBreak. It is a live competition for high score between up to ten players in a limited amount of time. Playing Trophy Race awards players with Gold Chests, which give some of the most consistent rewards in the game, and Trophies, which allow them to reach harder Lands, unlocking new Cookies and receiving better rewards, and eventually even join the Champions League.

In Trophy Race, three to ten players run on the same map, with the goal of reaching the highest score under a time limit. Unlike Friendly Run, gameplay is not synchronous. Players are allowed to pause or restart their run as many times as they like, but this may not give them enough time to reach a high score.

Players choose two Cookies: one to start with and a Relay Cookie. When the starter Cookie runs out of Energy, the Relay can start running at half Energy for

1,000. On select Burning Days, Relay Cookies can run for free. The Pet and Treasures selected do not change for the relay.

When transitioning between acts during the race, or after finishing a run, the scores of other players who have finished their run are visible. When the time is up, the runs of all players immediately end, and results are calculated. Participants then see the result screen, and receive their rewards: Trophies and Gold Tickets.

Trophies are one of the two rewards from Trophy Races. The amount of Trophies a player has determines what Land they can run in and what players they are matched with. Trophy count is the only matchmaking factor- Escape Level and Cookie and Pet levels do not effect who is matched together.

Trophies are given out at the end of a Race, depending on rank. If less than ten players are running in a race, the amount of Trophies In higher Lands, low ranked players will lose Trophies. If enough Trophies are lost, a player can fall under the required Trophy count, and must go back to the previous Land.

10,000 lets players enter the Champions League when it is available, as well as the special Land's End: Badlands Depot. In this final Land, players are put into Tiers based on their Trophy count. At the end of a season, all players in Land's End receive a Crystal reward based on their Tier, and lose some Trophies. Players at Gold rank or lower (less than

The second reward from Trophy Races is Gold Tickets. Every player who reaches the minimum score for the Land receives Gold Tickets according to their rank. The first place finisher receives ten Gold Tickets, and the ninth and tenth receive only two. If a player is not in the top three, but their score is close to the first place score, they receive bonus Gold Tickets. These can bring their total received Tickets up to seven if the scores are close enough, regardless of their placement. If a race has less than ten participants, the amount of Gold Tickets each player receives is not recalibrated, unlike Trophies. If a player gets last place in a four-player Trophy Race, they will still receive six Tickets.

100, but note that this does not include the Gold Tickets.

The contents of a Gold Chest varies depending on the current Land, with higher Lands giving better rewards. All Gold Chests contain Crystals, Coins, and Cookies or Pets. The Gold Chests of higher Lands also contain one Spirit Potion each. A Land 1 Gold Chest contains

10,873~12,018, one Spirit Potion, and 62 Cookies or Pets, with five guaranteed Epic and 25 guaranteed Rare. Gold Chests can also rarely contain Treasures and Legendary Cookies and Pets.

Lands are the different maps where Trophy Races can take place. Each one is more difficult than the last, and puts players up against stronger opponents with higher Trophy counts, but also gives better rewards from Gold Chests. Most Lands also have at least one Cookie and Pet that is unlocked when the Land is reached. Previous Lands can be played on in Practice Mode.

When Cookie Run: OvenBreak first launched, there were seven Lands. Three of those Lands were each split into two Lands, and three harder Lands have been added, for a total of 13 Lands, in addition to the Champions League, which is not a Trophy Race Land. 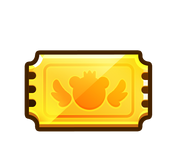 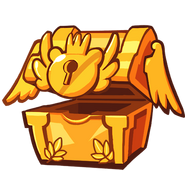 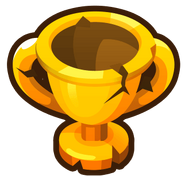 A cracked Trophy, seen when Trophies are lost. 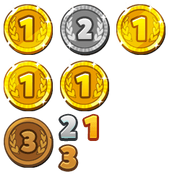 Race Waiting sprite sheet, when Land 7 was the last Land.